I have often sung the praises of Darabont’s 2007 The Mist adaptation. From the casting, to the interesting changes that Darabont made, the movie is a social conscious monster film that plays so deftly in the muddy mire of human fallibility that it is at once one of the better Stephen King adaptions ever made and a master stroke of Hitchcockian movie-making. I’m trying to go into this with an open mind and look at it as a world-building exercise, something that I think horror is starting to learn from. So, check out what the good folks over at EW had to day about it below and give the brand spankin’ new trailer a watch!!!

“In the new TV adaptation of Stephen King’s The Mist, the characters have as much to fear about what’s within themselves as they do the creature roaming through the fog.

Spike has released the first trailer for the series, which debuts June 22, and fans of the novella will notice it takes the premise – a strange vapor rolls in, and otherworldly predators are unleashed – and adds an entirely new cast of characters.

“I wanted to be respectful to the source material, but my feeling was there was already a great adaptation out there by Frank Darabont,” says show creator Christian Torpe, referring to the 2007 film with the infamous gut-punch ending.

“The novella is 200 pages and one location, and we needed to change that to make an ongoing series. But we wanted to remain faithful to the heart of the story,” he says.

Gone is the grocery store, where residents of a small town take shelter from the beasts outside and unleash the sinister qualities within themselves. The series will be spread out over several lockdown locations, including a church and a mall where hundreds have holed up against the monsters.

“But we are not just in the mall,” Torpe says. “We establish different little pressure cookers under the influence of whoever the leader would be in those locations. Each of them come up with different theories or beliefs about what’s going on. Eventually, the story lines will dovetail and turn into conflicts.”

Sex is also a much bigger theme in this version of the story – since it’s something that tends to provoke people’s dark sides.

SINS OF THE FLESH

One of the main characters, Eve Copeland (played by Alyssa Sutherland of Vikings), is a school teacher whose sex-ed class has sparked controversy in town – and revived old gossip about her past. “She was sort of a wild child, and the town still subliminally holds her sexuality against her. There’s a lot of misogyny under the surface.”

Eve’s husband, Kevin (Morgan Spector, from Person of Interest), is a prototypical nice guy. “He’s thismodern-dayy, liberal man,” Torpe says. “He believes in all the right values of kindness and forgiveness, but they’re easy values for him. He’s never been tested. I wanted to test: Does he have the courage of his convictions, or will he break under enough pressure?”

Their daughter, Alex (Gus Birney) has always played by the rules, unlike her mother, but she’s beginning to develop a rebellious streak just as a supernatural evil begins to waft into town.

Their neighbor is Nathalie Raven (Six Feet Under’s Frances Conroy), who has a kind of spiritual connection to them. She is part prophet, part wannabe martyr, and has what Torpe describes as “a twisted, almost mother-son relationship” with the local sheriff, Connor Heisel (played by Mad Men’s Darren Pettie.)

The sheriff’s son, Jay (Luke Cosgrove), is a high school football star accused of a violent crime – so even before the mist rolls in, the townsfolk are at odds with each other.

Lording over the trapped people at the mall is facility manager Gus Redman (The Wire’s Isiah Whitlock Jr.), who sees a chance to exert some real authority for a change. “He’s the guy who has gone as far as he can go in his life. He’s a bureaucrat and never felt he got the respect he deserved,” Torpe says. “With a good hundred survivors trapped in the mall, he tries to rise to the occasion and become the respected leader he always felt he was supposed to be. He’s trying to establish his own empire.”

Among the other characters: Russell Posner as Adrian, an insecure teen who is a confidant to Alex; a modem-minded priest (Frasier‘s Dan Butler), whose faith is tested by the behavior of those seeking shelter in his sanctuary; Danica Curcic as Mia, a drug addict who is in town seeking a hidden trove of cash; and Okezie Morro (Red Tails) as Bryan Hunt, a soldier suffering from amnesia.

While the series will try to establish a different story from the King novella and the Darabont movie, Torpe did hint at some possible crossover later in the show. “It’s a weird cousin to the original material,” he says. “It has a constant ebb and flow communication with the novella. But who knows? Maybe some of the original characters will make a cameo at some point.”

For him, The Mist serves as a chance to use a horror story to explore real life dynamics, much as The Twilight Zone did decades ago.

THE FEARMONGERS AROUND US

“Unfortunately, I thought it was incredibly timely to do a show about what people do when they are blinded by fear,” Torpe says. “We look around at what’s going on in the world, and everyone is constantly looking for someone to blame, or someone to lead them to the promised land. They find people to hate, either because of their gender or race or faith. Those are elements we tap into — how fear drives things like misogyny and homophobia.”

While the characters grasp for explanations about the monsters in their midst, fans who listen closely to the trailer will hear the name “Arrowhead” mentioned – a reference to a theory proposed by the novella’s characters.

But even then, King never offered a definitive explanation for his creatures.

“It’s more about people seeking answers than the answers themselves,” says Torpe.

For him, The Mist is a psychological thriller, with monsters thrown in to stir emotions.

“I pitched it as ‘Ingmar Bergman’s Jaws,’” he says. 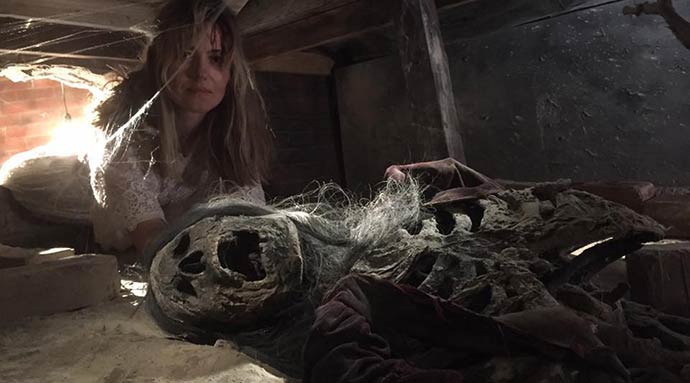