In times of need, in times of stress and anxiety, there are platitudes that we use to give each other, the Hallmark-like one-liners that we keep loaded in the chamber just in case we don’t have the right words. In case we don’t know what to say. In case we truly don’t give a shit. Platitudes like, “Every person has an untold story.” Most of the time we could care less about someone’s untold story. The less we know, the more comfortable we are. The safer we feel. A.R. Hilton’s Anonymous Killers threatens the idea of what happens when you stop giving a shit about someone’s untold story.

A unique marriage between serial killer puzzler plots like the ones found in the Saw franchise and the raw pulp shoot ‘em up action bloody thematics reminiscent of the Smokin Aces series, Hilton’s flick tries to walk the line between both, giving the viewer a taste of what makes a killer kill. The plot is delivered simply, but with a little flair, with action right out of the gate, five hard-boiled murderers are caught by an anonymous playboy-type, fitted in shock-inducing electric chairs and made to regale one another with the reasons they do that voodoo that they each do so well. At the end of their night of torture, they will vote as to which amongst them should be allowed to live, and which will meet a gruesome, yet perhaps fitting, end at the hands of their demented, cultured host.

Not unlike the tried and true narrative formula for an HBO original series show, Anonymous Killers lures in the viewer with some flashy heart-pumping action scenes and scintillating shots of sexual stimulation, and once they are hooked, Hilton slows the tempo to a crawl. The truth of the second act becomes apparent at this point that we are to begin the string of narratives and reveal what the movie truly is—a pantheon of Death, a character analysis of horror archetypes reminiscent of a class reunion of Tales From the Crypt. Ultimately, as each killer gives their origin story, we begin to see less weight to the characters as before, when we were introduced to them as these brooding, dark, and contemptuously scary idols. They instead become caricatures rather than Jungian archetypes, but as someone pointed out to me, is that not what reality television is? Is not our favorite voyeuristic multi-million dollar making guilty pleasures not a look at ourselves in our most simplistic terms? We hear each tale of horror, revenge, carnal pleasures, and sadistic glee, and somehow along the way actually care, maybe even empathize, with each of the characters’ untold stories.

This leads to the true key to unlocking the puzzling trap of Anonymous Killers. It isn’t in the gruesome stories of horror and mayhem that Hilton weaves for each of his malicious murdering marauders of malcontent, but the thrill of adding one additional killer to the mix, one that is in the film, but doesn’t even know that he, or she, is even aware of it themselves—you. Almost as if in a gruesome homage to the Master of Suspense himself, in a singular scene at the end of the film, Hilton pays tribute to the audience of the whole horrible recalling of acts of gore and terror with a simple bow by the film’s host and mastermind after fulfilling his role as executioner and emcee. But he is not bowing to a captive audience in a viewing room, watching the final judgement of those that did not escape the inevitable and deadly grip of Fate. Like Hitchcock’s infamous Rear Window moment of 4th wall breaking suspense, we realize we are among the Anonymous Killers, listening to their untold stories, making our own judgements based on the evidence presented, and finding twisted pleasure in seeing their sentence carried out. But, we’re safe to be a killer, because no one will judge us. This was all a work of fiction, so that means our killer instinct is not real to, right? So, we’re safe, right? 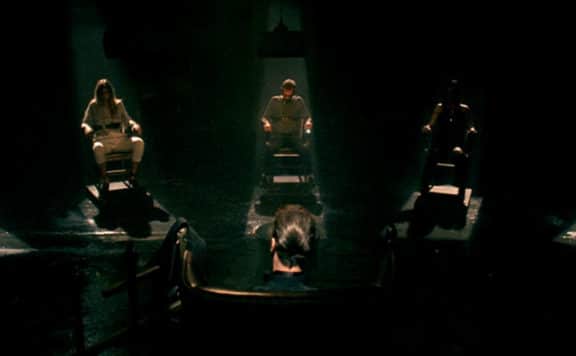 Five captives. One deadly trial. Watch the judgement this October