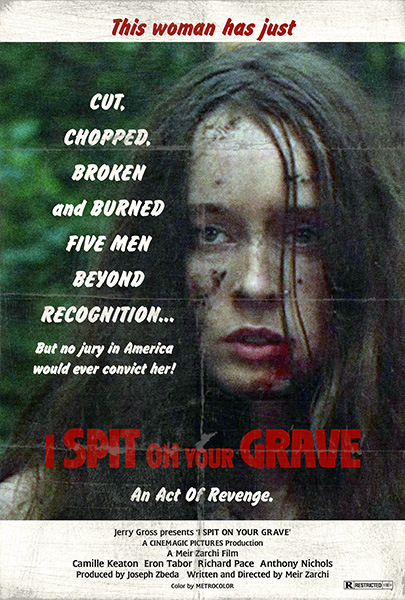 Camille Keaton “tells all” on Camera with Meir Zarchi, Creator of 1978 Cult Classic I Spit On Your Grave.

Los Angeles – February 17, 2014 – 36 years after the making of the controversial 1978 cult classic I Spit On Your Grave, actress Camille Keaton will appear on screen with director Meir Zarchi in upcoming documentary.

Day of the Woman a.k.a. I Spit On Your Grave was inspired by Meir Zarchi’s experience with a victim of rape. After stumbling upon a teenage girl in a park in the aftermath of a violent assault, Zarchi began to imagine how a woman in this situation might fantasize about revenge. Moreover, he wanted to depict to the audience the real horrors of rape.

The story follows Jennifer Hills, (played by Keaton), a magazine writer from New York City, as she retires to a secluded cabin in the woods to write her first novel. While there she is brutally assaulted, raped and left for dead. But Jennifer is alive. Emotionally destroyed, she no longer writes her novel; instead she finds herself choreographing a horrific revenge scheme to inflict punishment on her assailants.

Upon its theatrical release in 1980, the movie was described by the late prominent film critics Gene Siskel and Roger Ebert as “Easily the most offensive film” they had ever seen, yet hailed by others as a cinematic masterpiece. The debate continued as the movie was pulled from theaters in the United States, then branded a “video nasty” in the United Kingdom and placed on the Director of Public Prosecutions’ list of prosecutable films.

Still, 36 years later the film continues to attract both praise and negative criticism and has even spawned a remake in 2010 and sequel in 2013.

Now in production, the I Spit On Your Grave 1978 Documentary will reveal some insight into the madness and the man behind it all. Created by Terry Zarchi (son of Meir Zarchi, who also played a small role in the film), this project will deliver both a personal and informative view that only someone who grew up with this movie can provide.

“Growing up with I Spit On Your Grave has inspired me to tell the story behind the story.” said Zarchi. “This is perhaps the most misunderstood film of all time and Camille Keaton’s involvement will shed some light on the many questions still surrounding the film”.