Norman Reedus, who plays Daryl Dixon on AMC’s The Walking Dead, talks about arriving at Alexandria and shares his cocktail recipe inspired by the apocalypse.

Q: Once the survivors get to Alexandria, Daryl really feels like the odd man out in a civilized society. Have you ever felt so out of place before? Do you think Daryl could ever be “domesticated”?

A: He’s definitely the outsider. I felt that way pretty much all of high school. [Laughs] All those years are awkward. I really like that line [in Episode 415] when Joe says there’s nothing sadder than an outdoor cat pretending he’s an indoor cat. It’s very appropriate.

Q: What’s your favorite way to wind down after a heavy episode? Does it ever take you a while to “come down” off your character?

A: I always have my motorcycle on set, so I’ll ride through the woods, back home and just feel the breeze on my face, look at the trees, look at the sun going down or coming up. It’s a great way to wind down, but also a great way to get ready. I do some of my best thinking on there.

Q: You’ve mentioned that Daryl would be an a–hole if the zombie apocalypse hadn’t happened. What makes you think that?

A: Well, his brother was kind of an a–hole and I think he was slowly turning into his brother. Merleeven says that they had met up at that camp [where Rick was] to initially rob everyone before it all went south. I imagine Daryl would still be doing things like that, being up to no good. In Episode 412, “Still,” Daryl talks about running with his brother before the apocalypse.

Q: In Episode 506, Carol says Daryl used to be a kid, but is now a man. Do you think the apocalypse was a rite of passage for him?

A: I think, in a lot of ways, he would have never had this opportunity to become a different person. He’s never had people rely on him before.

Q: What was it like to reunite with Melissa McBride on set? Do you still get fans trying to “ship” Carol and Daryl?

A: Yeah, I get the shipping with Beth, with Carol, with Rick… I get all the shipping. Working together with Melissa again was great. She’s a good friend of mine and she’s fun to work with. Like the rest of the cast, we all get together really well.

Q: Was it hard for you to shoot that scene where Noah takes your crossbow, even though you were acting? Have you grown attached to it?

A: Yeah, of course. That’s like my right hand. When he initially met Noah, Daryl got it: this is a young kid who’s scared. He’s not a bad guy. The world we’re in causes you to do things you wouldn’t normally do, so Daryl let him get away. That’s why when Carol went to shoot him, Daryl stops her.

Q: With Daryl having such a tough exterior, what was it like filming that scene during Episode 412, “Still,” where he breaks down in tears and opens up to Beth? Was it hard for you to put yourself in that place at all?

A: Those places are always hard. They’re really exhausting, as equally exhausting as fighting a bunch of people. You have to get ready by remaining quiet right before you do it. Our crew is supportive of whatever an actor has to do that for the day and you see that actor show up with headphones on or looking at the ground. You give them their time and space to get in the right frame of mind. That’s what’s so cool about this job. I can do that and they let me do that. I feel totally comfortable doing that in front of them.

Q: Daryl introduces Beth to moonshine last Season. What’s your drink of choice? Do you think you could concoct a cocktail inspired by the zombie apocalypse?

A: [Laughs] Wow, what an original question. That’s a first! I have quite a bit of moonshine in my house in Georgia. Working down in the South, sometimes you get slipped some here and there. They’re so sweet that I can’t do anything but sip them once every month. An end-of-the-world moonshine? Jeez. Maybe for Norman, it’d taste like coffee which would completely be disgusting, but Daryl’s would taste like, I don’t know, Jim Beam and bacon?

Q: Jim Beam and Bacon. I need that on a T-shirt!

A: Yeah, a little comfort and a little bacon.

Click here to read an interview with Lennie James, who plays Morgan on AMC’s The Walking Dead.

0 0
Previous ArticleInterview: Ole Helland, Director of Through the WoodsNext ArticleWanna See a Director’s Cut of Stephen King’s “Carrie”? Here’s How!

See the Opening 4 Minutes of the Mid-Season Premiere Early
February 9, 2016 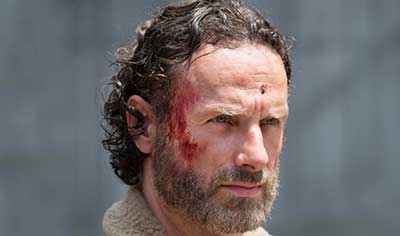