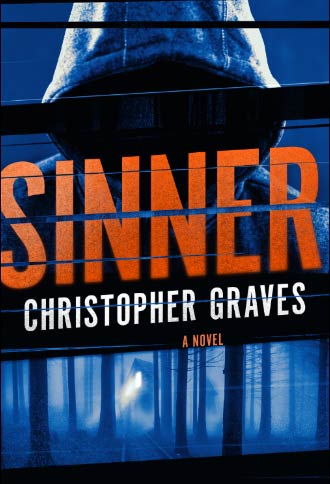 SINNER, named Best Psychological Thriller Script by the New Hope International Film Festival, will soon become a published novel in April 2018. Written by Christopher Graves, the psychological thriller is inspired by the Bald Knobbers, one of the most feared gangs of vigilantes in 19th century America. Its prologue opens in Douglas County, MO, just 50 miles from the Bald Knobbers’ first meeting on April 5th, 1885 in Kirbyville. Readers are taken back in time to the year 1887, where Minerva Yates lies on a dusty patch outside her local brothel waiting to die. Met with enormous misfortune, she and her bevy of soiled doves are the latest targets of the infamous Bald Knobbers. Paul Adison, a teenage member of the group, stands mask-less between his disguised counterparts—surrounding the terrified young women who fear the worst. Declaring his devotion to the Word, Paul initiates the act of moral justice, dragging the sinful women to their deaths.

Now, more than a century later, a devilish character emerges from present-day Eastern Pennsylvania. Clad in a goat-horned hoodie, middle-aged Zeke is a modernized version of his Bald Knobber grandfather, Paul Adison. Speaking almost exclusively in verses quoted directly from the King James Version of the Bible, Zeke believes his crusade has been ordained by God himself, which gives him the ultimate consent and mandate to capture and cleanse. As he encounters more and more “tainted” souls in and around Pennsylvania throughout SINNER, it becomes clear this malevolent serial killer will stop at nothing in pursuit of his moral quest. Strong and colossally resilient female characters, like the flawed and severely destructive Sylvia and the scrappy, tenacious Dani, influence and propel Zeke’s entire journey.