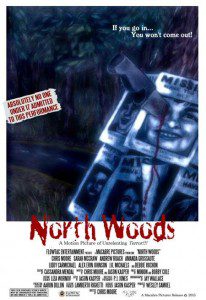 In the vein of such terrifying films as Phantasm (1979), The Evil Dead (1981) & The Texas Chainsaw Massacre (1974), comes psychotic motion picture of unrelenting terror! A horror film set in modern times, but is shot, stylized & paced like a film straight from the 70’s & 80’s. But despite its’ sense of nostalgic familiarity, it flips many of the old tropes & cliches on their heads & will keep you on the edge of your seat, not knowing what is bound to happen next…

From within the woods, a blood splattered young man, John Prescott, runs out in front of a car, terrified and muttering gibberish. Enter Dr. Pamela Alley, an esteemed psychiatrist, and Detective Morris, her contact & partner from the local police force, who have just been assigned the boy’s case. As the teen begins telling his diabolical tale of a local weekend vacation gone horribly wrong, it becomes clear that nothing is ever what it seems when a very troubled substitute teacher, with a webbed past of nightmares, emerges as the center of the proceedings. What keys does she hold to the nearly phantasmic events surrounding the area for the last several years?

When it comes to the woods in Brahams County… sometimes digging for answers digs your grave… …And if you go in… you won’t come out.

link to the teaser trailer:
https://www.youtube.com/watch?v=Hs7ZvuhjqQU

link to the IndieGoGo campaign:
igg.me/at/NorthWoods2015Film

link to the campaign video:
https://www.youtube.com/watch?v=Bsor4YHYrzM

Garden Party Massacre has an Uninvited Guest in this Trailer