Directed and written by Ted Moehring

The film, years in the making, can now finally be purchased and dirt cheap exclusively from Alpha Video at:

Years ago, brilliant scientist Dr. Paul Carruthers bred a giant murderous bat to take revenge on his former employers for swindling him out of a fortune. Now his deranged grandson returns to the small town of Heathville to continue his work, recreating the special perfume that enrages the bat to attack anyone who wears it. He uses it to strike vengeance down on the descendents of the men and women who wronged his grandfather. Can anything stop the Devil Bat this time?

Revenge of the Devil Bat is an homage to Poverty Row horror movies from PRC and Monogram Studios. It features a cast of cult B-movie horror legends. Conrad Brooks of the Ed Wood stock company appeared in Plan 9 From Outer Space (1957). Conrad passed away in 2017 shortly after completing his scenes for the film. George Stover is considered a legend in the Baltimore B-movie scene for his roles in John Waters’ Desperate Living (1974) and Female Trouble (1977). Dick Dyszel is better known as TV horror host “Count Gore de Vol” in the Washington area. Rochelle Davis played Sarah in the cult classic The Crow (1994) with Brandon Lee. Sexy scream queens Tina Krause and Ruby LaRocca will be familiar to fans of Seduction Cinema. Kris Yeaworth is the son of Irvin Yeaworth, director of The Blob (1958) and 4D Man (1959). Revenge of the Devil Bat is written, directed, photographed and edited by Ted Moehring, who also made Bloodbath in the House of Knives (2010), Invasion of the Reptoids (2011) and Camp Blood 666 (2016), all of which are also available from Alpha Video. 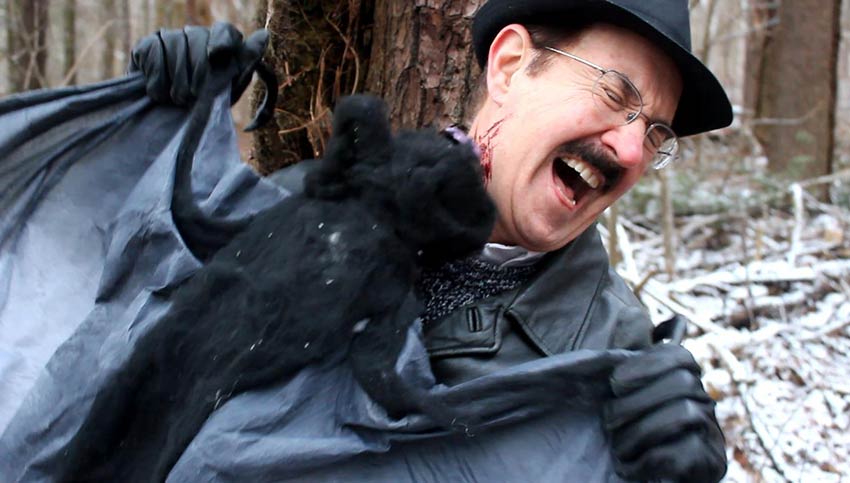