Wyvern Hill is a unique indie horror film about Beth (Pat Garrett a close collaborator of Frank Oz and Jim Henson), a mother in her 60s who is showing signs of Alzheimer disease.
Because of this she is forced to move into a new home, in the country with her daughter Jess (Ellie Jeffreys) and Son in Law Connor (Pete Bird). But because of her condition, she realises only too late that something or someone has moved in with her.

Wyvern Hill is unique in many ways, not least of which its budget, a mere £5000 but the intention was that the film would look and feel a hundred times that amount. It was a passion project initiated by Dr Who and TV screenwriter Keith Temple, who came up with the idea and wrote the script which was the re-adapted by director Jonathan Zaurin (and a heavy contribution by Pete Bird) to make it his own. Another particularity is that it was shot in 2020, in Hereford (a city not exactly known for producing a lot of films of any kind, in fact I believe it is Hereford’s first indie horror feature film) between two lockdowns. More importantly, it is a film which has an extensive cast, with a huge number of characters, multiple locations, and scenes with extras, rather than fit into what we’ve seen produced in 2020, the webcam movie (nothing against it at all, needs must but we did things differently). 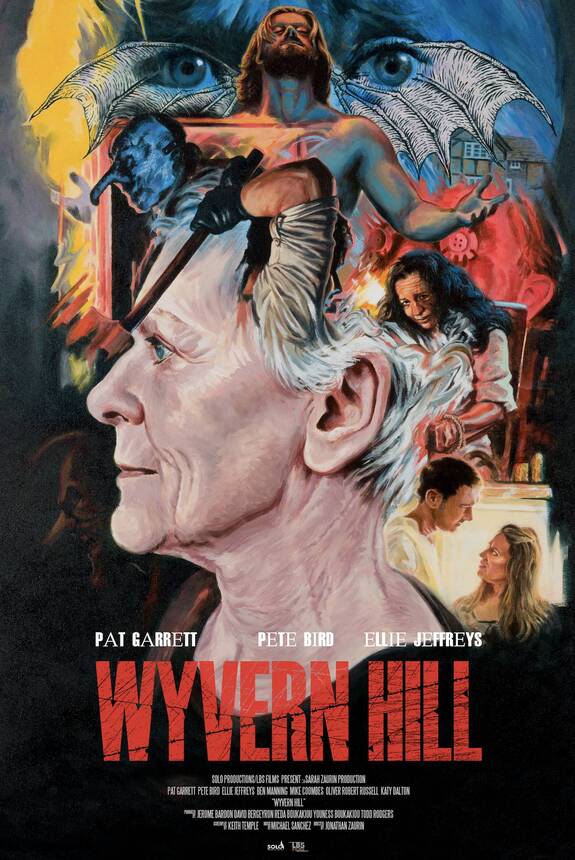 It involved a huge amount of talent including world famous puppeteer Richard Coombes, Michael Sanchez composing the score, Mike Coombes playing a very dark character, Pablo Raybould and Ben Manning of the Snarling fame and it received a huge amount of support from the local community with locations and transportation.

Shooting between lockdowns in these conditions was a constant challenge, and in a way, I feel like we’ve done something very few indie low budgets have even attempted last year.
The primary target was to keep everybody safe, and one of the challenges was that Pat, our main actress, was a potential high risk with Covid, so safety had to be a constant priority on this shoot. So, you have to imagine being on a 5k budget film and having to implement a huge number of safety protocols, and we are talking social distancing, masks, temperature checks three times a day and for anyone arriving on set and a huge number of contingencies in case someone fell ill.

Luckily, it went as smoothly as a shoot like that can possibly go, it went on for 25 straight days (pretty much from 7am to 12pm most days) and nobody fell sick! So, we must have done something right! I don’t recommend it to anyone, it was the most stressful possible time to shoot anything, and we did it on a budget that doesn’t even cover a Hollywood film’s lunch budget for a day.

The trick was to rely heavily on creating a bubble, a family where we would all support each other and pull in the same direction and everybody made the necessary sacrifices, I think because we all believed in each other and in the film. It’s quite heart-warming really, especially in a year as rough as 2020 to see a group of people pushing together to create something, they believe have value. That’s not to say it was without its problems, and it was possibly the most stressful environment to shoot anything but there was unity at every level of the production, from producers to extras.
The film is a huge mix of influence, in fact it’s quite funny because it’s not always conscious. Keith doesn’t have a particular history with horror, but I have been a huge fan since I can remember, and it was important to me that I injected as much of what I love into this film as possible.

The result is a weird mix of melodrama, heightened horror with ultra-violent bouts of gore and a very creepy unsettling atmosphere (and of course a touch of humour).
What’s funny is that I edited an essay about Dario Argento shortly after shooting Wyvern Hill for Arrow Video and all these influences just sort of got revealed to me by the essay. It’s not that I wasn’t aware of these influences, it’s just that I wasn’t aware to what extent they leaked into the film, from Argento to Mario Bava (father and son) with a touch of Wes Craven, a lot of John Carpenter and flashes of Tobe Hooper and a heavy influence from the 90’s scene of music video and their elliptic edits. It’s going to be one hell of a ride and a very strange one at that.

One of the things that the mix of myself and Keith did is that it created an approach to the story which I feel isn’t at all usual for this type of film (at heart a slasher with hints of Giallo), it goes into quite horrific territory with some characters that, hopefully, people will feel a connection to.

They’re just everyday people, with everyday tiny problems, trying to live their lives but horror breaks in through no fault of their own. I think the idea for both myself and Keith was to crystalise Alzheimer disease as something dark and murderous. It’s also despite being the first, a proudly Herefordian feature, which celebrates its region and landscapes and also its mythology.