New cover-art revealed for the novella ‘Creep’ Indie author Lou Yardley is taking further steps into her monstrous dark fantasy world of Venari with her new novella “Creep”. Creep is a loose prequel to her novel, Banished, which was released last year. Dealing with the origin story of Angus Rutland, one of the characters featured in Banished, it also introduces us to goblins, a cast of entertaining characters, a seemingly ageless Queen, and a whole host of lies and betrayal. While “Banished” was set in the small village of Elkbury, Creep takes us to Red Fern, a sprawling medieval-esque city where all manner of undesirable things hide in the shadows. Creep is set to be released this summer with the release date to coincide with that of Yardley’s next novel, Everfrost. Lou had this to say about the books: “Creep is a loose prequel to Banished, and Everfrost is a loose sequel to Banished. There are characters and places that pop up frequently throughout all three books, but you should be able to enjoy each book on its own. You can also read them in any order.” Earlier this week, the cover-art for this novella was revealed. Once again, Lou Yardley has enlisted the help of artist Neil Fraser who is also working on the cover-art for Everfrost. In other news, “Banished” is moving into Amazon’s Kindle Unlimited from 19th April. If you’d like to grab a non-Amazon eBook, please head to Lou Yardley’s Ko-Fi store where the ePub is available until Sunday 18th April. After that, you’ll be able to enjoy “Banished” for free as part of your KU subscription. Grab the ePub here: https://ko-fi.com/s/30f8e2ee6f Get the eBook, paperback, and hardback from Amazon: mybook.to/banished-venari The next Venari series, “The Rise of the Fool”, is currently being written by the four goblins in a trench-coat who masquerade as Lou Yardley. This series will follow on directly from the events in “Everfrost”. https://louyardley.com https://twitter.com/louyardley https://www.facebook.com/louyardley https://instagram.com/louyardleyauthor http://viewauthor.at/louyardley 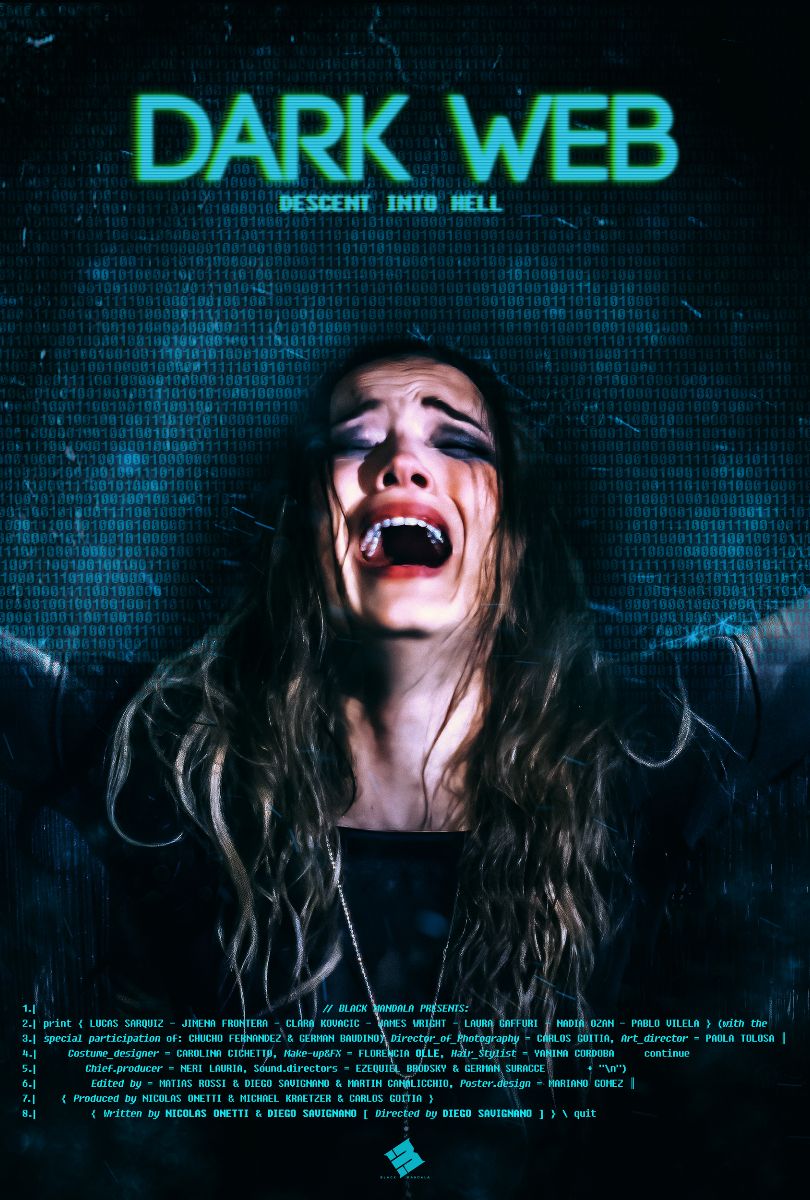 “‘Black Mirror’ meets Schumacher’s ‘8mm'” The genre specialized company Black Mandala presents the posters and the trailer for its new and disturbing horror thriller, Dark Web: Descent Into Hell, directed by Diego Savignano (The Birth of Evil). Aliens, mutant dogs, sleep experiments, FBI conspiracies… this is the bare bones of the Dark Web. There are eight levels, and deep down you can find hell itself. What begins as a simple YouTuber game with disturbing videos and fakes, as the main character goes deeper and deeper into the Dark Web, everything begins to go dark… a no return journey. The most twisted and perverse can happen. His secrets emerge like a body floating in salt water, like a beautiful nightmare. It’s as if an episode of Black Mirror meets Schumacher’s 8mm. TRAILER Synopsis The Dark Web is the large part of the Internet that is inaccessible to conventional search engines. Experts estimate that search engines crawl and index less than 1% of all the content that can be accessed over the Internet. A young YouTuber, “Ludovico 122”, will try to reach the eighth level of the Dark Web, penetrating the deepest and unknown part of the internet while he films the experience for his audience. But he is not prepared for a horrible surprise that will change his life… Cast: Lucas Sarquiz, Jimena Frontera, Clara Kovacic, Chucho Fernández, James Wright, Laura Gaffuri, Nadia Ozan, Germán Baudino, Pablo Vilela. Country: Argentina /Nueva Zelanda. Direct by: Diego Savignano. Script: Diego Savignano, Nicolás Onetti. Producers: Nicolás Onetti, Michael Kraetzer, Carlos Goitia. Producer Company: Black Mandala Films. Art Director: Paola Tolosa. Sound: Ezequiel Brodsky, Germán Suracce. Cinematographer: Carlos Goitia. Editing and Animation: Diego Savignano. Costume Designer: Carolina Cichetto. Hair Stylist: Yanina Cordoba. Make Up and FX: Florencia Olle.

Trick or Treat Studios new Ghoulies 2 collection to be released 4/15/21. Horror fans have been clamoring for this release since the line was first unveiled back in January of this year. Ghoulies 2 is a video store rental favorite that is too rarely represented!

10/31 Part 3 is the third installment of the critically acclaimed Halloween horror anthology films produced by Rocky Gray. ABOUT THE PROJECT: Directors for the newest feature include Michael Ballif director of They Live Inside Us, Jacob Perrett director of Spine Chiller, Brad Twigg director of Killer Campout and Zane Hershberger director of Force To Fear with special effects artist Cody Ruch on board providing some KILLER practical effects. Returning to Executive Produce is P.J. Starks creator of 13 Slays Till X-Mas. Also returning is our horror hostess Malvolia: The Queen of Screams to guide us into our world of monsters and madmen. Music for all of the segments will be provided by Rocky Gray who also worked on 10/31 and 10/31 Part II. 10/31 Part 3 is currently in-production and scheduled for a 2021 release through Scream Team Releasing. Please help us make our best Halloween Horror Anthology yet! Indiegogo: https://www.indiegogo.com/projects/10-31-part-3?fbclid=IwAR0bb7LzgLbkjq21uGTyXXsGW1W3xJ8Pt_Vfn-0U8FXXJbzxDw7BYRz3zeI#/

FRANKIE SIXX (daughter of Motley Crue rocker NIKKI SIXX and Baywatch star DONNA D’ERRICO) MAKES HER FILM DEBUT CLEOPATRA ENTERTAINMENT ACQUIRES ENGLISH SPEAKING RIGHTS TO “ESCAPE FROM AREA 51” FROM GIRLS AND CORPSES FILMS Sci-Fi Comedy debuts domestically Summer 2021 Cleopatra Entertainment has acquired North American, UK, New Zealand, Australian, and South African distribution rights to ESCAPE FROM AREA 51, a Sci-Fi/Comedy directed by Eric Mittleman. Starring Donna D’Errico (Baywatch), Chris Browning (Sons of Anarchy, Ray Donovan), and Frankie Sixx (daughter of Mötley Crüe founder/bassist Nikki Sixx), the film was produced and financed by Robert Rhine President/CEO of Girls And Corpses Films in association with Sterling Entertainment and TomCat Films. ESCAPE FROM AREA 51 begins when a group of teenage conspiracy theorists try to raid the infamous military base, Area 51, in the Nevada desert. No one gets in – but someone gets out. Sheera (D’Errico), a sexynbalien warrior, uses a power glitch to escape from captivity at Area 51. Her escape using a portal gun sets off an energy signature which attracts the attention of her arch-rival in space Sklarr (Browning). Sheera must now elude an Area 51 scientist, as well as Sklarr, to rescue her fellow warrior and find her way back to her planet. The rights deal was brokered by Founder/CEO Brian Perera, VP/GM Tim Yasui of Cleopatra Entertainment and by Ted Chalmers of TomCat Films on behalf of the filmmakers. The film’s star, Donna D’Errico, who directed her scenes with her daughter Frankie adds, “It was a really fun experience working on this film, but getting to direct my daughter was truly a treat. She finally did stuff I told her to do. But seriously, she’s so great in this!” “I have always been fascinated by the Sci-fi genre and Escape From Area 51 explores the possibility of an alien escaping from the top secret Nevada facility during an attempted raid by teen conspiracists,” said Producer/Girls And Corpses FILMS President Robert Rhine. “We were very lucky to get actress Donna D’Errico (Baywatch) on board as our lead alien along with Frankie Sixx (D’Errico’s daughter with famed Motley Crue rocker Nikki Sixx) in her first movie role. Fans will have a blast watching this fun sci-fi flick.” “My goal with ESCAPE FROM AREA 51 was to create a fun and different Sci-fi comedy,” said Director Eric Mittleman. “When they let me cast my longtime friend Donna D’Errico that sealed the deal, because she’s fun and I’m different.” ESCAPE FROM AREA 51 will be released domestically on VOD Platforms this summer, and also as a Home Entertainment DVD and Blu-Ray package. About Girls and Corpses Films Robert Rhine is CEO/President of Girls and Corpses Presents Films and wrote and produced the multi-award winning Cynthia (2018 Lionsgate/Indican) starring Scout Taylor-Compton, Sid Haig and Bill Moseley and Exorcism at 60,000 Feet (2020, Shout Factory) starring Lance Henriksen, Adrienne Barbeau, Bai Ling and Bill Moseley. Rhine also executive produced: Rob Zombie’s 31, Attach on LA/Parasites, Bodies, Predator World, The Chair, Beach Massacre at Kill Devil Hills and Night Caller. About Cleopatra Entertainment: Cleopatra Entertainment is a Los Angeles based multimedia company founded by Cleopatra Records head Brian Perera. Recent films in release include Glenn Danzig’s critically-acclaimed horror film VEROTIKA, the UK drama MRS LOWRY & SON starring Academy Award winner Vanessa Redgrave, the action-adventure extravaganza CHINA SALESMAN starring Mike Tyson and Steven Seagal and Egypt’s official entry to the 2018 Academy Awards foreign language category SHEIKH JACKSON. CLEOPATRA PICTURES presents A GIRLS AND CORPSES FILM IN ASSOCIATION WITH STERLING ENTERTAINMENT/TOMCAT FILMS ESCAPE FROM AREA 51 DONNA D’ERRICO CHRIS BROWNING ANOUK SAMUEL CHLOE AMEN CALEB THOMAS ZEKE JONES AND INTRODUCING FRANKIE SIXX COMPOSER JOHN BOEGEHOLD DP JOHNNY McCONVILLE EDITOR ERIC MITTLEMAN VISUAL EFFECTS CLINT CARNEY WRITTEN BY ERIC MITTLEMAN AND CARLOS PEREZ STORY BY CARLOS PEREZ, TED CHALMERS AND ROBERT RHINE CO-PRODUCER ERIC MITTLEMAN PRODUCERS ROBERT RHINE AND DAVID STERLING EXECUTIVE PRODUCERS TED CHALMERS and ROBERT RHINE DIRECTED by ERIC MITTLEMAN