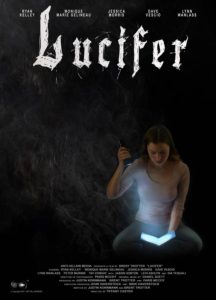 Anti-Villain Media and director Tiffany Castro have completed production on the supernatural horror title Lucifer. Now, the film is slated for an appearance at the American Film Market, in Santa Monica. The film stars: Ryan Kelley (“Teen Wolf”), Jessica Morris (Haunting of the Innocent) and ex-con actor Dave Vescio. Now, a full length trailer is available for the film.

In the story, Amiel (Monique Marie Gelineau) is pursued by a demonic force. She turns to the Bible for comfort, but the Devil is only growing stronger. Now, she must uncover the demise of a previous victim, before she can set herself free.

A release date is coming soon for this feature. After the AFM, it is expected that an official release will be announced. Until then, fans of supernatural features can find out more on Lucifer, here. New photos, a full length trailer and a concept poster are all available, ahead of the film’s upcoming launch.

Official synopsis: A young caretaker believes her family is being tormented by the devil, after

she agrees to write the chilling story of a patient haunted, by the relentless demonic being.

0 0
Previous ArticleHorror Short ‘Clown-O-Gram’ proves its ok NOT to let the creepy fuckers in…Next Article“This Is Where the A**holes Live”: Visit Negan’s Sanctuary

Do you have the Jingle Balls to Finish it?!?!? Black Friday Brings Us Short Horror-Comedy “Holiday Fear”!!!
November 24, 2017

New “Blair Witch” trailer brings the terror and everything we’ve been waiting for!
August 21, 2016