Over the past few years I have found myself disappointed with the current state of mainstream horror. This means I spend more time avoiding the next haunt or paranormal whatever to try and find some real horror, something original and deplorable. Necrostorm has become a bunch of folks we can count on to give us movies that are so violent sometimes even I squirm.

Hotel Inferno is the latest full length feature film from Necrostorm. These guys always have something new for each movie and this time we get a splatter flick shot like a video game in first person perspective. Being a video gamer only added to my excitement as for years I have thought about the different and cool ways you could shoot a video game like a movie. Let’s load up and see if Hotel Inferno can blast baddies like we have a controller in hand.

Frank Zimosa is a hitman-for-hire who just received a pretty simple contract, murder a couple of serial killers in the hotel room next door. The instructions are pretty simple. He must use specific possessed weapons while wearing high tech shades that allow the boss to see his handy work and the deaths must be of a specific sort like rip these guts out or remove that body part. What could go wrong, right?

Upon beginning the hit Frank can tell something is wrong and ends up killing the “marks” incorrectly all while deciding he no longer wants to be a kill people for a living. As this is all happening we have our employer Jorge Mistranda chirping away about how we fu*ked up and now Frank is the hunted. Meanwhile the hotel fills with henchmen looking to complete their own contracts.

It is very clear from the opening credits that writer/director Giulio De Santi wants the viewer to be immersed in the gore and nonstop action for the next 80 minutes. Nothing breaks from the FPS style, even the map is presented video game like. This is a very brave choice that can either make or break a film. In this case it helped to keep me up close and personal as each head exploded or body part was removed.

Having seen and liked both Adam Chaplin and Taeter City, I kinda knew what to expect here and did not put a lot of expectation into the story or characters. Once again the bad guys seem to have odd deformities which is seen across all three films. This isn’t a complaint as much as an observation. While I watched the movie I could not shake the feeling I have seen/played this all before. One game popped into my head, Condemned: Criminal Origins. I loved this game for what it was and this film bears more then just a striking resemblance. The first person combat of the game and this movie really cemented the connection.

The king here is the gore and it’s in full Necrostorm force. As always, we get to see some new and inventive weapons and kills. I won’t spoil any of them but a chain and tree really stick out. Once again there is a great emphasize on practical effects with lots of splatter. If you cannot handle blood, please look elsewhere.

I don’t come into movies like this demanding a star studded cast and excellent character work. We are here for the effects/gore and I review these types of movies on just that. There are some gripes I did have though. Little things like a chainsaw that really didn’t seem to have a chain or how silly some of the grenade traps were. Leaning a grenade on a stick will not cause it to go off when moved, just saying.

The demon Her looked pretty cool but was an overall letdown for me. What was with the 4th of July sparkler effects protruding from her mouth? There is also a scene later showing Frank’s hand and there is no bandage or wound. This is tough to swallow because of an extended scene earlier showing the washing and bandaging which detailed the damage to our hero’s hand. 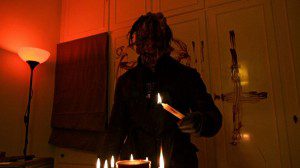 If you are a Necrostrom fan or video gamer you owe it to yourself to see this movie. It’s an 80 minute first person gore ride that has a kickass 80’s-ish score.

-Missteps with small things like the chain less chain saw.
-Final Boss (Her) effects were a letdown.
-Continuity throughout film (hero’s hand).

follow the link to visit Necrostorm and purchase Hotel Inferno.

Trailer released for Gore-Fest ‘THE MILDEW FROM PLANET XONADER’ from Necrostorm
January 5, 2016