Fresh off his Outbreak trilogy (Outbreak: The Hunger. Outbreak: The Mutation, and Outbreak: Endplay) which re-defined the zombie genre and made zombies frightening again, Shoyer is back. This time he tackles and updates the cosmic horror genre and proves that Lovecraft’s creation is more relevant than ever today. But Horror in the Clouds isn’t just a work of fan fiction. Shoyer not only creates terrifying new Elder Gods, he makes them believable.

Shoyer effortlessly creates a new Lovecraftian world where the new Elders are trying to break through. Not only do we see the main characters attempting to hold back these creatures, but Shoyer also takes us to the creature’s realm and inside the creature’s dark, twisted mind. There he offers a glimpse of an alien world full of horrors, suffering, and despair which most people couldn’t dream of in their worst nightmares.

The Squire family is on what they think is a relaxing family vacation to see the Grand Canyon. When they get to the town of Derleth, it seems they found a quaint little town in the heart of the American Southwest. Instead, all the Squires found was betrayal, secrets, and horrors in the sky. Damien Squire, the father, caught a glimpse of something in the clouds but shook it off as road exhaustion, but once he realizes the creature he saw is real, will it be too late to stop it from entering our world? Ancient bloodlines come into play as the town’s leaders and practitioners of a sacred cult attempt to bring the Elder God, N’Xabez, into our world. A prisoner stuck between its world and ours, N’Xabez demands to be unleashed in our world. N’Xabez requires sacrifices in order to satiate its thirst and hunger, and now that it senses the Squire bloodline is in the town, it knows it can complete an ancient ritual to permanently make it the supreme ruler of our world.

“I really wanted to do something different with this novel,” explains the author, founder of the popular AnythingHorror.com website and community. “Since I had completed my Outbreak trilogy, I wanted to show that I wasn’t a one-trick pony. I have a lot more depth than just zombies.”

Continuing, “The Outbreak trilogy was designed from the ground up to give the zombie genre something new, and I think I accomplished that. I’m very proud of that trilogy. I promised my readers that the violence, gore, and horror in that trilogy will keep coming at them hard and fast, while also having interesting, strong characters that drive the narrative forward. And now I want to do the same thing with cosmic horror. I have a series of novels planned that will be set in the universe I create in Horror in the Clouds. These future novels will explore various facets of that universe.”

Horror in the Clouds as well as the Outbreak trilogy are all published by Severed Press. Check out Scott Shoyer’s author page on Amazon.com where you can learn more about the author and his other published works.

About the author, in his own words:

I’m a horror writer who is a life long fan of the genre. I draw inspiration from everyday situations and then put them through my twisted filter to hopefully shock, disgust, and entertain you.

I find my heaviest influences from the writings of H.P. Lovecraft and Clive Barker. With my Outbreak trilogy I get to write about the sub-genre I grew up on—zombies—and while doing so I get to add my unique twist to it. In addition to zombies, I also love writing about more human monsters and I have many more ideas for novels, short stories, novellas, and scripts. I recently wrote a short script for a brutal, violent Joker-Batman confrontation, and I am currently writing a series of novels that are heavily influenced by Lovecraft (Horror in the Clouds is the first). I’ve created my own Lovecraftian world full of nightmarish creatures and madness—including horrible things that live in the darkness.

In addition to Horror in the Clouds and my Outbreak trilogy, I currently have four short stories published in four different horror anthologies. You can check out all my writings on my Amazon Author Page. 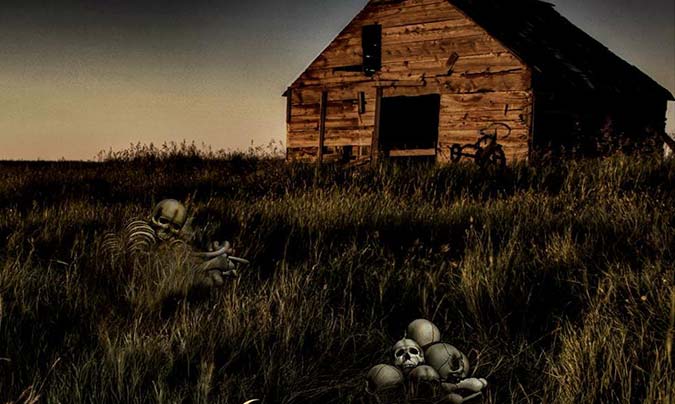