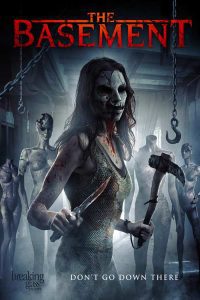 Chosen as one of the “21 Horror Movies That Will Make You Scream in 2017” (Boom Howdy), THE BASEMENT stars Caroline Boulton (Hercules, ‘Dr. Who’), Richard Rifkin (The Martian, Eragon), and Zalan Takacs (Spy, The Martian).

After a huge house party, a group of international students looking for a thrill decide to investigate an abandoned basement. Officially, the basement has been abandoned for decades. However, they soon discover that it is anything but empty. What starts off as an exploratory séance ends in bloody mayhem when a malicious entity is summoned. Supernatural freaks, mystery, blood, and death lurk around every turn. As the survivors try to escape at all costs, their situation becomes more and more dire.

“Indie horror has always been a staple at Breaking Glass, and we pride ourselves on finding new and exciting titles from promising filmmakers”, said Rich Wolff, CEO of Breaking Glass Pictures. “We are proud to add László Illés’s The Basement to our extensive library of genre films.”

THE BASEMENT will be available to buy/rent on the following platforms: iTunes, Amazon Instant, Google Play, PlayStation, Xbox, Vudu, and On Demand through your local cable/satellite provider.